Skip to content
We all have an angel, we all matter to God

We all have an angel, we all matter to God

Archbishop Wenski’s homily on feast of the Guardian Angels, at Stewardship and First Ambassadors Day

Archbishop Thomas Wenski preached this homily at the Mass celebrated during Stewardship and Ambassadors of First Impressions Day, held Oct. 2, 2021, at Belen Jesuit Prep in Miami.

Today, October 2nd, the Church celebrates the feast of the Guardian Angels, la fiesta de los Ángeles de la Guarda, o ángeles custodies. While the whole life of the Church benefits from the mysterious and powerful help of the angels, the feast of the Guardian Angels celebrates those angels assigned to guide and protect each one of us from our infancy till death.

One of the first prayers that I learned in my childhood – and I can remember praying it in kindergarten – was the prayer to one’s guardian angel. 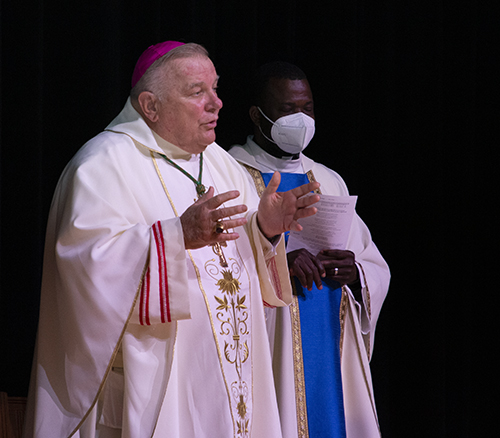 Photographer: ANA RODRIGUEZ-SOTO | FC Archbishop Thomas Wenski speaks at the start of the Mass for more than 250 volunteers and parish staff who gathered at Belen Jesuit Prep Oct. 2, 2021, for the Stewardship and Ambassadors of First Impression Day hosted by the archdiocesan Office of Development.

“Angel of God, my guardian dear to whom God’s love commits me here, ever this day be at my side, to light and guard, to rule and guide. Amen.”

As many people know, for recreation I like to ride a motorcycle, so I am sure that I have my guardian angel working overtime.

The Catechism affirms: “The existence of the spiritual, non-corporeal beings that Sacred Scripture usually calls ‘angels’ is a truth of faith. The witness of Scripture is as clear as the unanimity of Tradition.” (CCC 328)

Angels are not dead humans “who have earned their wings” but are “personal and immortal creatures, surpassing in perfection all visible creation.” (CCC 330).

At every Mass, angels are given a special mention in the Preface acknowledging that our own worship and praise is offered in the sight of the angels. Sacrosanctum Concilium, Vatican II’s Constitution on the Sacred Liturgy, insisted that the full liturgical assembly includes not just the people gathered in a parish church at a particular time and in a particular place, but the full liturgical assembly includes angels, saints and indeed the entire cosmos.

As Pope St. John Paul II said in Ecclesia de Eucharistia, paraphrasing that same Vatican II document, “The Eucharist is really a glimpse of heaven appearing on earth. It is a glorious ray of the heavenly Jerusalem which pierces the clouds of our history and lights up our journey.”

Of course, in a secularized, rationalistic world there is no room for angels, just as there is no time for liturgy. For a world closed to transcendence cannot bring itself to admit of the existence of these purely spiritual creatures with intelligence and will, any more than it can admit that God matters. Such a world, as Pope Benedict XVI said, can seem like a desert.

But it was into this world that an angel was sent by God to announce to Mary that the Word would become flesh in her virginal womb; likewise, angels appeared at the tomb of Jesus and announced to the women that he had risen as he said. The angels then “evangelized,” that is, they brought good news, by proclaiming Christ’s Incarnation and Resurrection. Today, the angels – and the Church’s celebration of the angels – continue to remind us that the world, created by a good and provident God, is more than just a desert and that man is destined for more than just to one day die.

That the Guardian Angels watch over each one of us is a reminder of the infinite worth of each one of us. Even if in the eyes of the world some people are considered unimportant and even expendable, even if some are viewed as “nobodies,” in God’s eyes every human being is a somebody, every person no matter his station in life is important and indispensable. Every person is loved by God who cares enough for each one of us to send a holy angel to watch over us.

May our guardian angels ever be at our sides “to light and guard, to rule and guide.”