Speakers define ‘giving’ as more than money, a response to God’s overwhelming love 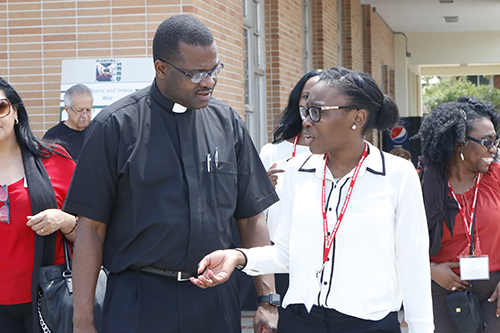 Photographer: ANA RODRIGUEZ-SOTO Msgr. Chanel Jeanty speaks with Donica Magiste, one one of the members of his stewardship committee at St. James Parish in North Miami.

MIAMI | The adage, “Give until it hurts,” has nothing to do with stewardship. In fact, true stewardship might be the exact opposite: “Give because it hurts not to.”
That was the message preached at Planting the Seed, a conference held on what organizers dubbed the first Archdiocesan Stewardship Day. Planting the Seed drew 151 representatives from more than a dozen parishes to St. John Vianney College Seminary April 14.
The conference was meant “for anyone at the parish, from the priest to people in ministry to volunteers. It’s to ignite the stewardship fire,” said Grace Veloz, director of stewardship for the archdiocesan Development Office.
Speakers included local pastors who have implemented stewardship programs and representatives of companies that help churches manage online donations. The keynote speaker was Mary Ann Otto, director of stewardship and special projects for the Diocese of Green Bay, Wisconsin.
“Stewardship is the response to being a disciple. It is how we live our lives once we say yes to God,” Otto said. “It is first and foremost about changing our heart.”
She pointed out that dropping money in the collection basket each Sunday “because it’s the right thing to do” is not really stewardship. “There are great people who are atheists who do good things in the world.”
Christian stewardship is the natural response to experiencing the love of God, Otto said. “If we want people to respond, people have to know that they’re loved and that God loves them.”
That experience necessarily changes people’s lives, and “as our hearts change, our habits change,” she said. “Do we trust God?” 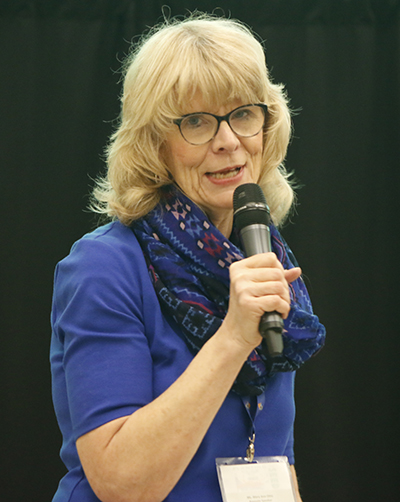 Photographer: ANA RODRIGUEZ-SOTO Keynote speaker Mary Ann Otto of the Diocese of Green Bay, Wisconsin, told participants at Planting the Seed that “stewardship is the response to being a disciple. It is how we live our lives once we say yes to God.”

She cited statistics that show Catholics give about 1 percent of their treasure to the church, whereas evangelicals promote tithing, or giving 10 percent to the church, as required in the Old Testament. She related the story of an evangelical leader who told her that tithing could be viewed as the minimum required, since in the New Testament, Christ “asks you to give everything.”
Stewardship is not “tipping God,” Otto said, but acknowledging that everything we have, from material possessions to family, neighbors and friends is a blessing. “We cannot be generous if we are not first grateful.”
To focus on money is to misunderstand stewardship, agreed Veloz, describing true stewardship this way: “When the parish stops being a drive-thru and starts being a second home.”
Unfortunately, she noted, stewardship is too often associated with fundraising. But it has less to do with money and resources — rich versus poor parishes — and more to do with community. 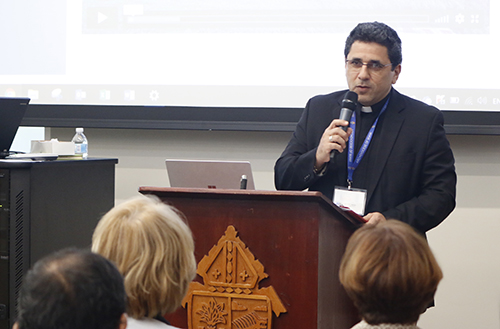 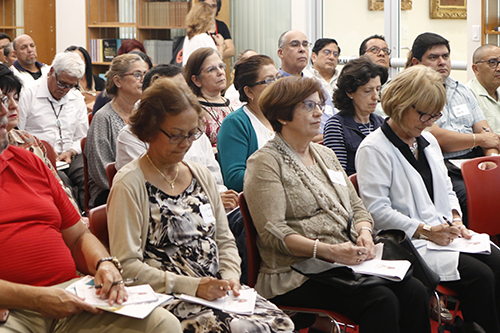 
In his homily, Archbishop Thomas Wenski cited a phrase attributed to St. John Paul II: “Nobody is so poor he has nothing to give, and nobody is so rich he has nothing to receive.”
“Stewardship is about your relationship with God and your parish,” Veloz said. “Discovering your gifts and sharing them joyfully. This creates commitment and responsibility. And yes, the money will come. But it’s not because you asked. It’s because they want to share.”
She noted that in nearly every parish, 7 percent of the people do 100 percent of the work. “We need to engage the other 93 percent. And statistics show that out of that 93 percent, 86 percent are waiting to be invited.”
But even if they overcome their fear and volunteer, often no one calls them back. “First you’re scared and then you’re rejected. You lost that person,” Veloz said. “We need to be more welcoming.”
A good example of true stewardship, she said, was the team of volunteers who helped her with the logistics of the conference, young adults from St. James Parishin North Miami — a community made up of mostly Haitian immigrants in a less than affluent neighborhood.
“They’re incredible,” Veloz said. “They believe in stewardship. They give what they don’t have and they fight for that parish.”
She said about 60 of the archdiocese’s 109 parishes and missions are engaged in some form of stewardship campaign. Some came to the conference to get started. Others to learn more.
Father Rafael Cos, administrator of St. Ann Missionin Homestead, rented a bus and brought 44 people from the parish.
“We’re doing (stewardship),” he said. “Everybody works.” But they attended the conference “to enter more deeply into the path we are on.”
St. Edward in western Pembroke Pines sent nine people to the conference, all members of its stewardship committee. The parish has 2,070 registered families and an average weekend attendance of about 2,300 people. They are raising money to pay off their debt and build a permanent church.
“It’s so vibrant. We have so many ministries,” said parishioner Adriana Shashaty. “Everyone wants to do something, wants to be involved.”
Her words were echoed by fellow parishioner Evelyn Goris: “We’re compelled to give of the joy that we have. And we want to share it.”