MIAMI | What has been described as the most significant overhaul of the federal tax system in three decades — the Tax Cuts and Jobs Act — has also been flagged as a potential train wreck for annual charitable giving.
With its provision to nearly double the standard deduction to $12,200 for an individual and $24,400 for a married couple, the new tax plan may reduce the number of taxpayers who itemize deductions — including charitable donations — from the current 30 percent to 5 percent.
Although the U.S. economy has shown a recent strengthening that may have positive outcomes for philanthropy, the disincentive to itemize, along with a decrease in the top marginal tax rate, could reduce charitable giving by anywhere from $4.9 billion to $13.1 billion annually, according to studies by the Indiana University Lilly Family School of Philanthropy. 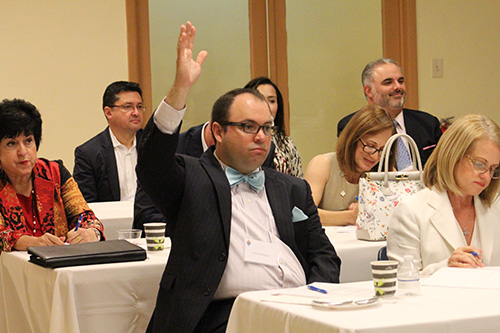 “All the charitable organizations are very concerned,” said Sally Mulhern, a New Hampshire-based estate planning attorney and author of “Estate Planning to Die For: An Insider’s Guide for Financial Professionals.”
“Fewer people are going to itemize, and one of the motivations for people to make charitable donations has been for people to itemize and to reduce their taxes,” said Mulhern.
She spoke with the Florida Catholicin tandem with her presentation at the second annual Legacy Planning Summit: Strategies for Professionals, sponsored by the archdiocese’s Development Corporation and held May 8 at Our Lady of the Lakes Church in Miami Lakes.
The event is a continuing education seminar and networking breakfast open attorneys, accountants, investment consultants, wealth managers, and insurance professionals.
Mulhern said she hopes the current anxiety over the tax law changes will be turned into an opportunity for charities to help educate their current and future patrons about the benefits of planned giving, in addition to annual giving, for which she offered several alternatives.
“There is a new hot word in charitable giving — ‘bundling,’” she said. “Instead of giving $4,000 in a given year, give $8,000, so that at least what would have been the second-year donation will be deductible.”
The idea is to bundle multiple years of gifting into a single tax year, meaning an individual may be able to itemize again and restore a charitable tax deduction.
“My hope is that people will look at their assets and make charitable gifts in a way that continues to benefit their financial and estate situations. Now more than ever, donors need to think about how they want to make their gift, not just to whom, if they want to maximize the tax benefits.”
Over the years, Mulhern noted, annual giving tended to be associated with volatility and smaller overall giving that turns from year to year on personal circumstances.

Daniel Biggs III, LUTCF, and a member of the Planned Giving Advisory Council for the Archdiocese of Miami Office of Development, takes notes via photos during Sally Mulhern’s presentation on estate planning.

Mulhern also suggested that charities and financial planning professionals make themselves more familiar with something that has been around for some time: the Qualified Charitable Distribution (QCD), also known as Charitable IRA Rollover.
The QCD allows otherwise taxable distribution from an IRA owned by an individual who is age 70½ or over to be paid directly from the IRA to a qualified charity of their choice.
“I have no idea why this giving opportunity hasn’t been heralded from the top of every church steeple,” Mulhern said, noting that through a QCD an individual can take $100,000 out of an IRA and apply that towards their minimum distribution, whereas in the past, pulling that same amount from the IRA for the charitable deduction would not have offset the taxes due.
“If I were running a public charity… I would get the word out (about QCDs) and I would craft a sample letter that people who could just give to their financial custodian instructing them to send $100K to the charity of their choosing,” said Mulhern, a graduate of Boston College and Cornell Law School.
Legacy planning, bequests of property and retirement accounts offer plenty of creative personalized options for donors and charities to work together, Mulhern said.
She said retirement-heavy South Florida residents and their families need to stay current with changes to the tax system by reviewing their retirement and estate plans in concert with their attorney, accountant, financial advisor and charitable representative or planned giving officer, if they have those relationships.
“My hope is that this change equals opportunity. That people will realize that retirement account charitable giving options are still out there, and, like gifts of appreciated stock, they provide fabulous opportunities,” Mulhern said.
“There are all kinds of things people need to focus on so they don’t lose the tax benefits of the charitable bequests they have already put in place,” Mulhern added. “Yes, there have been changes (to the tax code), but the most important source of assets hasn’t changed: retirement accounts. And by bundling your gifts you can still take advantage of itemization, and when you look towards bundling you will probably start looking at planned giving, which maybe you should have been looking at before.”
Karey Bosack Greenstein, senior director of Planned Giving for the archdiocese and organizer of the May 8 workshop, said she hoped the gathering builds new relationships within the professional community.
“A lot of people do charitable giving for tax reasons, but they leave it to the professionals where to leave it, and we want to be at the forefront of their minds,” she said. “The archdiocese has so many programs and giving opportunities, to children to homeless to battered women to hurricane relief.”
Bosack Greenstein noted there are 150 persons in the Archbishop Coleman Carroll Legacy Society, a planned giving donor recognition society for the Miami Archdiocese. There are a variety of giving vehicles: any type of gift that requires some sort of giving through a future component. Arrangements also can be made during a donor’s lifetime.
“I work with donors to help them pick an area of contribution and endow their gift, which provides a principal which is there forever, which is pretty powerful,” Bosack Greenstein said. “It is these gifts that really sustain the future of the Church.”