MIAMI | It ended with fireworks and Gloria Gaynor’s classic rendition of her monster hit, “I Will Survive.” But more importantly, the Archdiocese of Miami’s 60th anniversary gala ended with nearly $3 million raised for the spiritual and educational needs of archdiocesan seminarians.
Nearly 1,000 people dressed in a symphony of black and white — in honor of the gala’s theme, “A White Gala to Honor the White Collar” — spent the evening of Oct. 20 dining and dancing in the outfield of Marlins Park to celebrate the archdiocese’s birthday — and secure its future.
The funds will benefit the three local seminaries: St. John Vianney in Miami, St. Vincent de Paul in Boynton Beach, and Redemptoris Mater in Hialeah.
In addition to the $1,000 ticket price, the guests raised thousands more by bidding on live and silent auctions. They also donated more than $100,000 in less than five minutes after viewing a moving video and hearing a personal anecdote about what Archbishop Thomas Wenski termed “the true face of the Catholic priesthood.” 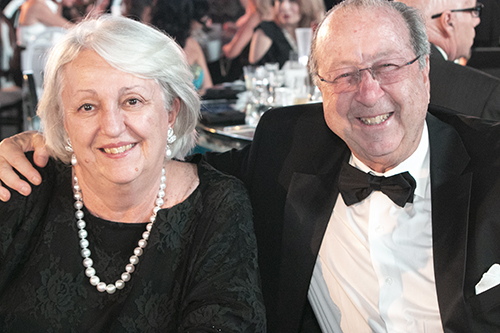 Alluding to the current spate of headlines about clergy sexual abuse, he noted that “the Church is being criticized for past failures. And I would emphasize that these failures are in the past.”
“Our seminaries are in good shape,” he said, “and our seminarians are good and healthy men. If you don’t believe me, go to the seminaries and see for yourselves.”
Archbishop Wenski himself was among the seminarians studying for the Archdiocese of Miami back in the 1970s. That’s when Eduardo Martinez met him. Now a parishioner at Holy Family in North Miami, Martinez was 18 or 19 then and a member of the youth group at the Centro San Juan de Puerto Rico in Wynwood — an outpost of faith in what was then a pretty rough neighborhood.
But Martinez recalled them as “beautiful times. We had many young people.”
He met his future wife in that youth group, along with her mother, by all accounts a saintly woman who called that seminarian “Thomas Whiskey.” Eventually, that seminarian would become what Martinez called the family’s “private priest” — witnessing his marriage, baptizing his children and burying his mother-in-law. 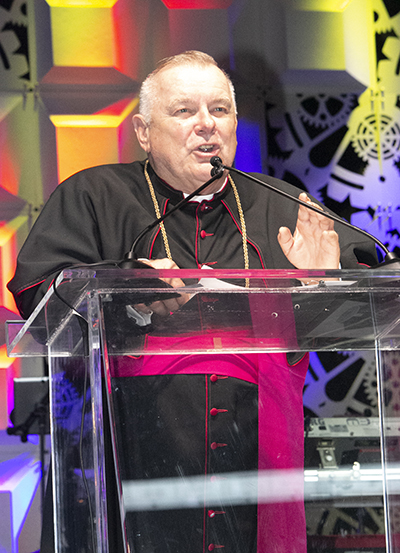 Photographer: ANA RODRIGUEZ-SOTO | FC Archbishop Thomas Wenski addresses attendees at the archdiocese’s 60th anniversary gala. Those who have children in college can appreciate the cost, he said, adding that he has 58 seminarians in various stages of formation at the three Florida seminaries: St. John Vianney College Seminary, St. Vincent de Paul Regional Seminary in Boynton Beach, and Redemptoris Mater Seminary in Hialeah.

A mother of nine biological children, and many more spiritual ones, she died of cancer at the age of 44. “She was like the mother of the neighborhood,” Archbishop Wenski recalled as he shared those memories with Martinez at the gala.
Father Richard Vigoa, the archbishop’s priest-secretary, shared another memory with the crowd. He recalled another woman who died — a 27-year-old named Janice, terminally ill with cancer, whom he met as a seminarian while gaining Clinical Pastoral Education credits at a hospital in New York.
At first, Janice wanted nothing to do with priests. She didn’t want to talk about God. You’re in luck, Father Vigoa told her. I’m not a priest. I’m a seminarian. And we don’t have to talk about God. But will you let me just stop in and visit you each day?
Ok, she said. So every day he stopped by to say hello. They started chatting. She had survived cancer as a child, and was in the midst of studying veterinary medicine at Cornell when the disease returned with a vengeance. She felt God was out to get her.
“That’s not our deal. You’re breaking the contract,” he reminded her. No use. “The floodgates opened. She wanted to talk about God.”
One day, on his way to visit her, “the Lord spoke to my heart: Give her your rosary.” He didn’t want to. It had been blessed by Pope John Paul II, and he treasured it. But he gave it to her anyway. She accepted, on the condition that he teach her to pray. Many days, “she was in such pain that I would pray it for her,” Father Vigoa recalled.
One day, he got a 911 message on his beeper, with her room number. He thought she had died. Not yet.
“I want you to know,” she told him, “that I’m okay. That I’m ready to die. And I’m ready to die because I love Jesus. And I love Jesus because you taught me how to love Jesus.”
She went to confession and made one final request: “Bury me with your rosary.”
A few days later, he did.
“If I do (nothing else) in my life, I can say that I saved one soul,” Father Vigoa said. “I saved a soul.”
He thanked those present for their commitment to funding the education of other men “who have that passion to save souls for Jesus Christ.”