Read accompanying story here: ‘You don’t do it for accolades’

MIAMI | They were no longer unsung heroes — and there were more than 200 of them.
Some of the archdiocese’s most faithful laity gathered Oct. 7 at St. Mary Cathedral to receive a special award for their decades of service. The event was a Vespers — evening prayer — service for the 60th anniversary of the archdiocese.
Coming from every corner of the archdiocese — from northern Broward to Key West — they included ushers, sacristans, catechists, extraordinary ministers of Communion and parish office volunteers. Some ran food banks, led Emmaus retreats, served donuts after Mass, and did myriad other tasks.
“This is only a very small gesture of our gratitude,” Archbishop Thomas Wenski said of the Jubilaeum award, a one-time accolade. “Today, we honor you for your service, which has made these past 60 years of grace possible.”
The Vespers service actually served triple duty. It was one of several events during the year to celebrate the six decades of the local Church, starting with creation of the Diocese of Miami in 1958. The service was also an occasion for Archbishop Wenski to confer the archdiocese’s highest honor, the Primum Regnum Dei award. The gold medal, showing a palm tree flanked with crosses, went to six individuals and two couples.
The Jubilaeum was different: It was given to two people in each parish, nominated by their pastor for their service at the local level. Each red-and-gold Jubilaeum pin is shaped like the medieval two-barred cross signifying the authority of the bishop.
LIKE A COMMENCEMENT
Nearly 900 honorees and their families packed the cathedral. To organize them, most pews were marked with the names of the parishes.
Guiding them to their seats were students from all three area seminaries: St. Vincent De Paul Regional Seminary, near Boynton Beach, and St. John Vianney College Seminary andRedemptoris Mater, both in Miami. 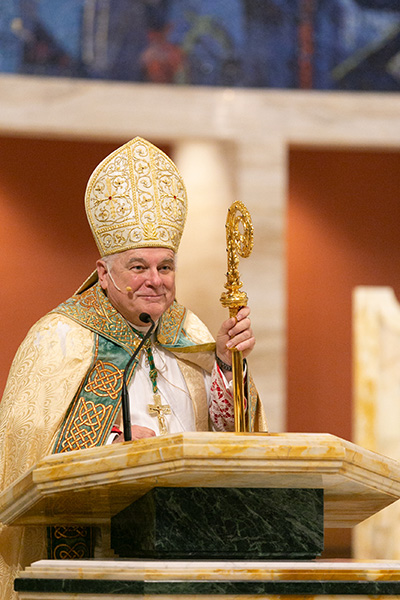 Photographer: TOM TRACY | FC Archbishop Thomas Wenski delivers his message to honorees at the 60th anniversary vespers for the archdiocese. The unsung heroes of South Florida’s parishes – two from each church – were honored on the 60th anniversary of the Archdiocese of Miami, during a vespers service Oct. 7, 2018 at St. Mary Cathedral. Nearly 900 people attended the event, where Archbishop Thomas Wenski presided.

The service took on the air of a toned-down college commencement. As recipients’ names were called, they approached the sanctuary with their pastors. Each received a certificate, posed for a photo with the archbishop, then descended to receive the Jubilaeum pin or Primum Regnum Dei medal.
But at one point, Archbishop Wenski stopped and announced, “This lady is 101 years old!” — and all eyes fixed on Rose Preseau of St. David parish, Davie.
Preseau said later that she has served in just about every committee at St. David since its founding in 1974 — and she doesn’t plan to stop.
“We started that church from nothing, and I grew with it,” she said. “Why should I retire? God gave me all of this. Until he calls me, I do what I do.”
SETTING AN EXAMPLE
Despite the lengthy process of calling each recipient to the sanctuary, the crowd maintained the solemnity of the occasion, with hardly anyone speaking above a murmur.
Archbishop Wenski prefaced his message with a typical dash of humor, citing an advantage of a Vespers service: “There’s no collection.”
He then outlined a brief history of the diocese, starting with its 1958 founding by the late Bishop Coleman F. Carroll, who also oversaw its reassignment as an archdiocese a decade later. He noted the growth of the local Church to nearly 1.5 million members today.
Archbishop Wenski also held up the archdiocese’s cultural and ethnic diversity as a model for the surrounding community. “In these times of great divisiveness and polarization in our society and world, may we Catholics, model in our parishes, organizations and apostolic movements what a reconciled and reconciling world should look like,” he said.
But the idea of a universal Catholic Church is abstract without parish life, he acknowledged — a life fostered and nurtured by the service of laity like those being honored at the Vespers.
“While you rightly deserve it, you are being honored not because you are necessarily any different from the rest of the laity of our archdiocese, but because you are representative of all of them, of their dedication and their devotion,” he said.
After final prayers and canticles, Archbishop Wenski thanked everyone again, then announced that prints of the photos were already available in the cathedral narthex.
“That shows I’m a good steward — I saved money by not sending them through the post office,” he added, drawing more laughs.
Many of the honorees said they were shocked and humbled at being chosen for the awards. Typical was Karen Bruener, who serves as a catechist, with the Ladies Guild and the prayer ministry at Blessed Trinity Church in Miami Springs.
“I’m very honored,” Bruener said as she exited through the doors of the cathedral. “You get involved, you work with people, you do what needs to be done.”
After getting their photos, the honorees went to a reception on the broad patio in front of the cathedral. Some were already wearing their Jubilaeum pins.
Gathering at round tables draped with white cloths, they noshed on sliders, croquetas, skewered mozzarella and cherry tomatoes, Cuban finger sandwiches, and a variety of ceviches in tiny glasses. They washed it all down with water, soda, or red or white wine.
Those attending received a final gift: a 60-page history of the archdiocese, with color photos showing parishioners from India, Cuba, Haiti and elsewhere. 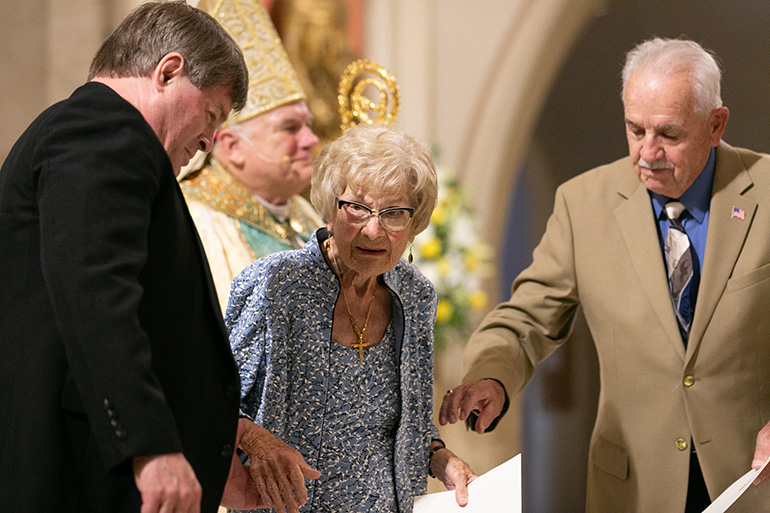 Photographer: TOM TRACY | FC Rose Preseau, 101, leaves the sanctuary after being greeted by Archbishop Thomas Wenski. She is accompanied by fellow Jubilaeum honoree John Frink and her pastor, Father Steve O’Hala. The unsung heroes of South Florida’s parishes – two from each church – were honored on the 60th anniversary of the Archdiocese of Miami, during a vespers service Oct. 7, 2018 at St. Mary Cathedral. Nearly 900 people attended the event, where Archbishop Thomas Wenski presided.